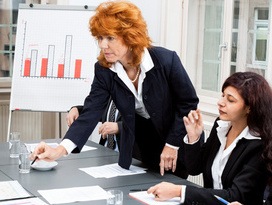 Succession planning can be tough, especially if you try to improve gender balance. Perhaps your organisation has a simple system of succession planning by just putting a couple of names in a box, and invariably the box contains more men and three men are shortlisted.

Perhaps your organisation has quite a sophisticated system, but when push comes to shove a man is often pushed forward, and rules are bent. As a result – regardless of your efforts in HR – gender balance is not improving, and you see women leave your organisation as they feel undervalued and disengaged.

Succession Planning, is it all about the best person for the job?

Succession planning systems don’t always help to create a better gender balance. In many organisations it is claimed that it’s all about getting the best person for the job, and succession planning should be on merit. There’s a wide held belief that evaluation of merit is objective and gender neutral.

No wonder then that, when processes aren’t objectified and challenged senior teams tend to rate male candidates higher than female candidates.  They just feel more comfortable, less like a risk and a better fit.

I am sure you are aware of these processes, but how to avoid them?

In a recent CIPD conference I picked up some really good ideas to help you improve your succession planning, and make it more Gender Smart. That is, to make them work for both women and men.

Any kind of system is better than none. When you have a plan decisions become more transparent, and it’s easier to challenge decisions. Of course, the process can still be overruled by senior executives e.g. when a trusted (male) colleague returns from abroad, but then HR has a tool to question the decision and ask difficult questions. This may turn the decision in favor of a woman now, or next time.

Development plans are often focused on (external) coaching and development programmes. It can work well to include ‘experience’ in them. Identify the types of experience somehow needs before being considered for a particular role.

This way, the promotion process becomes more transparent. A more transparent process usually works in favour of women, as they tend to take less risks, and are less likely to apply if they are not sure they are 100% ready. Transparency allows them to see they do tick the boxes. In jobs that are more transparent such as finance and sales jobs it’s proven that women find it easier to progress.

Including experiences also allows line managers to discuss with their team members which experience they still require. Women often miss particular types of experience that men seem to know they need to have, such as experience in Profit & Loss roles, financial, strategic or high profile roles. Once it is visible someone is missing this experience, they can be encouraged to take on a role where they can develop it. Men often need to be encouraged to work more on personal development or soft skills, which is already covered in current development plans.

It’s proven that when one or two people in a group give a certain opinion, others tend to prefer not to deviate and give the same opinion. In many succession planning processes candidates are discussed by a group of people and the more ‘standard’ candidate – often male- is chosen. To avoid group think it’s worth asking people to prepare their decision in private, submit it, then come together to debate the choices they made. This can be used in any context and e.g. works well with a 9 box grid, where individuals first score a list of people, submit their scores, and then choices are discussed in the group.

To avoid men from feeling excluded, it can help to phrase targets positively, ‘never less than 30% of any one gender in a team’.

To avoid unrealistic targets, it can help to set smart targets. The PR/marketing and HR departments may need different targets from the IT or Maintenance teams. More meaningful targets can for instance be derived from industry average, or gender balance figures of recent graduates.

Women are usually less likely to put themselves forward, or broadcast their own achievements, even if they do have a good track record and even if they do have the potential and are keen to move forward. Therefor it can help to ask women for roles, or suggest they take up a particular responsibility. In the subsequent conversation doubts can be taken away, and perceived barriers addressed.

Of course it’s hard to implement all of these at the same time. Evaluate where you are now, and which of these measures would have the biggest impact in your organisation, then start there. Because promoting women to boards, executive teams and developing the pipeline, are all impacted by the succession planning process. If your succession planning process is gender smart and takes into account gender difference you can be much more effective at improving gender balance in your organisation.