Manning Up – A Great Strategy for Career Progress of Women? 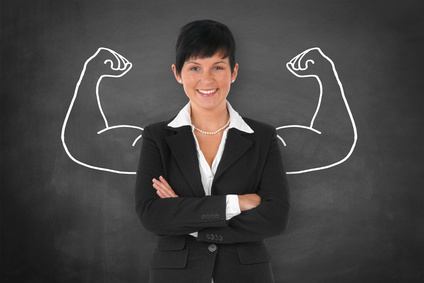 Career progress of women is often linked to behaviour. Women are told to just be more confident, aggressive, ask for what they want and broadcast their achievements. You probably hear similar advice regularly yourself too. It sounds like if women would just ‘man up’ they would progress as quickly in their career as men. But will that really work for you?

It does sound very reasonable. Unfortunately for most women it will not work. It’s just not that easy. Sure, there are things you can do to get ahead at work, and some of that you can learn from men. However, it is more effective – and easier- if you just work from your own strengths instead.

Why ‘manning up’ doesn’t work

I have got a great story that illustrates brilliantly why ‘manning up’ doesn’t work very well, and can even inhibit career progress of women.

When I am five years old the thing I want most are the playground go-karts. At break time I always rush out, straight to the queue for the go-karts. There I wait patiently for my turn, convinced the teacher will one day pick me. Sadly, it never is my turn.

I catch on, and start noticing that it’s always the big ones, the loud ones, and the pushy ones that get the go-karts. And they don’t just get them once, they get them all the time. So, I go for it in the next break. I run as fast as I can, to join the queue and I push my way through. I push people with my elbows, squeeze my tiny body through small gaps in the bustling crowd of bigger boys, and get near the front, bellowing, ‘Me, me pick me! And, no surprise, it works. Today the go-kart is mine.

I am over the moon and peddle around happily. A few minutes later a boy comes up to me, and reminds me that I should give him a turn too. Now, you need to know that my three sisters and I have clear idea about fairness and taking turns. So, I take those into account and reluctantly give up my turn, doing what is the right thing. The rest of the break I watch, and I notice, with growing indignation that the boy races around on the go-kart happily the remainder of the break. All by himself. He never one shares it with anyone else.

The problem with manning up is that it takes energy and effort to be like a man, and it often doesn’t feel right. Being pushy and loud didn’t feel right for me as a child. Keeping the go-kart all for myself during the break would have made me feel even worse.

In addition manning up can create a sense of insecurity. It is against what girls teach each other and what works in a group of girls. Being loud and keeping things for yourself is not accepted in a group of girls, and girls that do so are quickly ostracized.

It’s the same in business. When women try to learn from the men around them, it doesn’t feel right, takes effort and creates a sense of insecurity. Moreover it takes a while to learn, as boys have learned this sort of behaviour from a young age. On top of that it is often not accepted if women act the same as men. Women are judged differently (by men and women), and it can even have negative implications of women ‘man up’.

The Key for Career Progress of Women – Be Gender Smart

So ‘manning up’ takes time, effort, and makes women insecure. It doesn’t feel authentic and often doesn’t even work. Manning up clearly brings many issues, but what can women do instead?
I recommend women find their own way of doing things; a way that suits women and that is still effective. It’s about finding a way that builds on the strengths that women have. That is Gender Smart.

Women are not the same as men, their brain and psychology is not the same. Women have a more inclusive style, a more a cooperative approach, are more inclined to build buy-in and often have more of a focus on building relationships.

Instead of following the advice for career progress of women and ‘man up’ you need to be Gender Smart and see that your way of working brings as much value as that of men. Next, you need to make sure you speak up about how you work and the value you bring.